NATO allies have been sent into a tail spin as US President Donald Trump challenges the alliance structure, calling into question the wider global alliances of the US.

NATO allies have been sent into a tail spin as US President Donald Trump challenges the alliance structure, calling into question the wider global alliances of the US.

Alliances are the framework that have largely kept the world secure since the end of the Second World War. America has been an essential anchoring force for the North Atlantic Treaty Organisation (NATO) used to counter the then Soviet Union and Warsaw Pact, and closer to home, the Australia, New Zealand, United States (ANZUS) Treaty, which meant allies could count on the overwhelming might of the US should they face threats individually or as a collective.

President Trump is seeking to renegotiate the deals, particularly with some of the larger members of NATO, namely Germany, who has also drawn the fire of the President for signing a multibillion-dollar natural gas deal with a Russian government-owned natural gas company, over their financial contributions to the collective defence agreement

The President has been noted as saying, "I let them [NATO leaders] know I was extremely unhappy with what was happening and they have substantially upped their commitment and now we’re very happy and have a very, very powerful, very, very strong NATO, much stronger than it was two days ago."

Following which the President attributed the US$33 billion increase in NATO defence spending over the last 12 months to his efforts. For context, the US currently contributes 3.5 per cent of its GDP to the NATO alliance, while the UK provides 2.1 per cent, France 1.8 per cent, Canada 1.3 per cent, Germany 1.2 per cent, Italy 1.1 per cent and Spain 0.9 per cent. 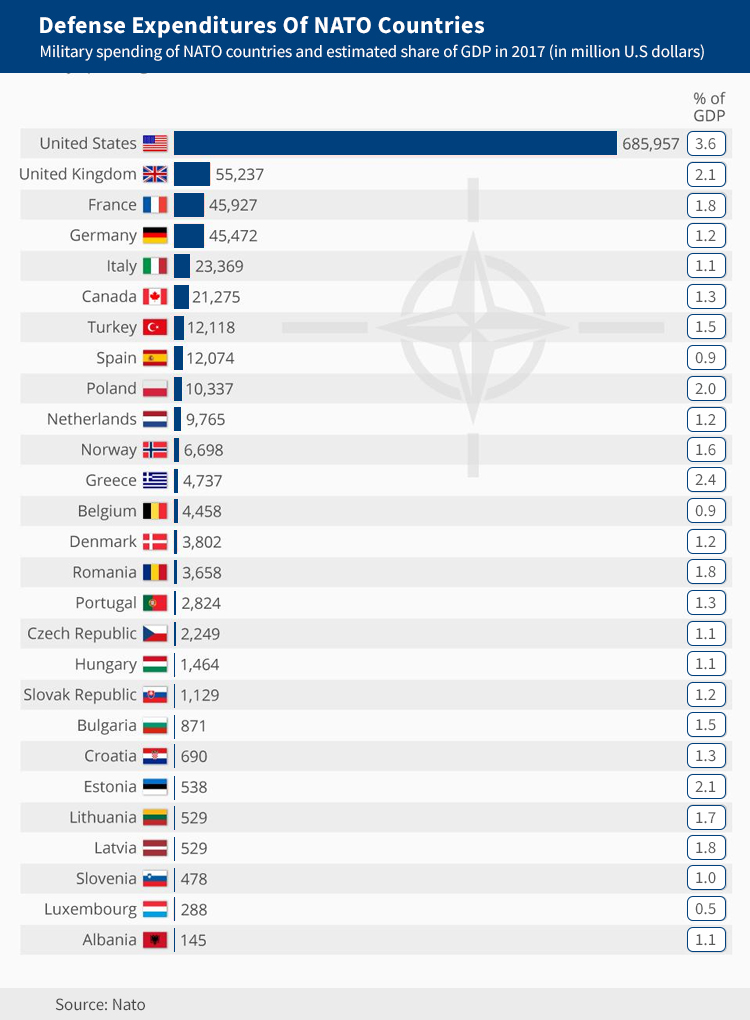 French President Emmanuel Macron was quick to respond, denying any change in policy as a result of US involvement, stating simply that the allies had reaffirmed their earlier commitment to increase defence spending to 2 per cent of gross domestic product by 2024. The US President was clear and direct in his statement: “They’re [NATO Allies] taking ad­vantedge of the United States. I’m not going to let it happen.”

In contrast, NATO Secretary-General Jens Stoltenberg has credited the President with increasing the NATO defence expenditure.

"All allies have heard President Trump's message loud and clear. We understand that this American president is very serious about defence spending, and this is having a clear impact," Stoltenberg said.

Further confusing matters is the burgeoning relationship between the US President and Russian strongman President Vladimir Putin, who will meet in Helsinki in the coming days. The US has pushed for the re-admittance of Russia to the G8 following its expulsion from the organisation in the aftermath of the annexation of the Crimea in 2014.

Russian aggression in other parts of Europe, particularly toward the Baltic and Nordic states, has heightened European concern about Russia's intentions and the nature of the relationship between the two former foes. President Trump has further exacerbated the sentiments brewing beneath the surface with European leaders by changing the language when referring to Russia and Putin in particular, viewing the rogue superpower as a 'competitor' rather than an 'enemy'.

This newly emerging paradigm of apparent instability could throw Australia's relationship with the US and its role in the Indo-Pacific into question.

Despite the chaos currently troubling NATO leaders, Defence Industry Minister Christopher Pyne reinforced the government's position and the nation's alliance with the US.

"Australia regards the United States as the most pre-eminent world power. We want it to be the most powerful military power in the world. And therefore its alliances with NATO, in ANZUS, with Japan and South Korea, are critically important. We don’t want there to be a time in the foreseeable future where any other country has the same military capabilities as the United States, or reach of alliances around the world of the United States," he said in London.

Particular concerns for Australia come following former Chief of Defence Air Marshal Mark Binskin AC's comments regarding the militarisation of the South China Sea, who recently said that the build up was "very, very concerning ... They'll put a spin on that it's only for defensive reasons. But ... if you didn't build an island, you wouldn't need to defend it. If there are weapons on those islands, they are militarised".

It is also hard not to identify, if perhaps only coincidentally, recent announcements made by the Australian government, particularly new surveillance drone Triton aircraft and the SEA 5000 anti-submarine warfare (ASW) Future Frigate program, and growing concern at some level about the degree of US involvement in the region, particularly in the face of increasing peer competitors.

Former prime minister Tony Abbott has echoed the calls made by Minister Pyne in a speech in Washington, DC.

"As a country that’s 'paid its dues' on the American alliance, we [Australia] have been treated with courtesy and respect but that’s no grounds for complacency in dealing with a transactional president ... It’s certainly less apologetic and still ready to use force, so at least for those allies that don’t shirk their responsibilities, Trump’s America should remain a reliable partner. Just don’t expect too much," Abbott said.

Serious questions remain for Australia in the new world of Trump's America, as a consistently reliable ally it would appear as though the special relationship will continue, but as leaders and parties change, policies evolve and the fluid nature of our strategic environment becomes more complex, Australia's role as a regional security partner and leader may become harder for us to maintain without increased investment in independent capability, especially in the face of an unpredictable US ally.

Anonymous -
Gene Kelly wrote:
Why not ask NAVAL Group to make the Nuclear sub instead? they have Barracuda design ready to go. Or was the real reason actually that the USA had...
....
Continuity of Australian submarine capability must... - 21 hours ago.

Ray -
Gene Kelly wrote:
Why not ask NAVAL Group to make the Nuclear sub instead? they have Barracuda design ready to go. Or was the real reason actually that the USA had...
....
Continuity of Australian submarine capability must... - 21 hours ago.

Bob - Currently the US has two Los Angeles subs as trading vessels and a further 6 laid up. Perhaps the government could enquire about obtaining the 6.......
Continuity of Australian submarine capability must... - 1 day ago.
Tweets by DefenceConnect