Defence Industry Minister Christopher Pyne announced $3.07 million of investment in Australian businesses as part of the latest round of Defence Innovation Hub contracts.

Defence Industry Minister Christopher Pyne announced $3.07 million of investment in Australian businesses as part of the latest round of Defence Innovation Hub contracts.

The Defence Innovation Hub enables Defence, industry and research organisations to collaborate on innovative technologies and ideas that can deliver leading-edge capabilities for Defence.

Minister Pyne said, “The government is committed to advancing defence capability through a $1.6 billion investment in defence industry and innovation over the decade to 2025-26, including around $640 million to support the development of innovative technologies through the Defence Innovation Hub."

The Defence Innovation Hub is an initiative of the 2016 Defence Industry Policy Statement and aims to mature and further develop technologies that have moved from the early science stages into the engineering and development stages of the innovation process. It is an initiative that will pull together research institutions, academia, industry and innovative technologies.

“The hub is committed to working with Australian industry to foster innovation at various levels of technological maturity, transitioning from concept exploration through to a mature, useable capability for the Australian Defence Force,” Minister Pyne said. 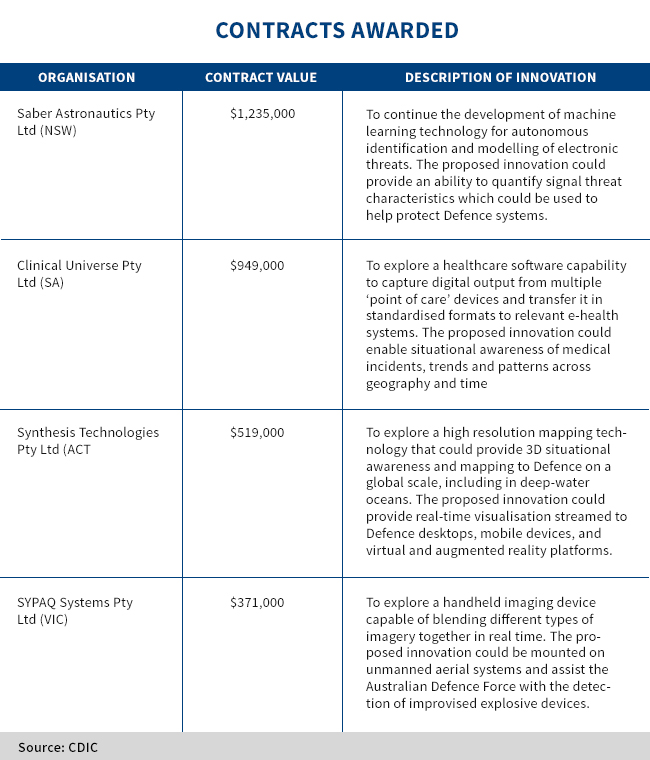 The government will announce innovation priorities within these streams for each financial year. This may involve changes to priorities from year to year.

Industry and research organisations can submit proposals through the Defence Innovation Portal here. Anonymous - I have worked as a Defence SME for 30+ years and I think this article is as true to my own lived experience as any I have ever read, except I probably.......
‘Big Hands’ announcements disengage SMEs - 14 hours ago.

Doug - Which war have we ,as loyal ally to USA won since on WW2,. Tthis comprehensive consequences for another but big one loss only after ADF treaty.......
What if Australia loses the next war? - 15 hours ago.

Marum Katze - My mates and I discussed this years ago. When Gough Whitlam declared, that he had it on good advice that there was no foreseeable threat to our shores.......
What if Australia loses the next war? - 18 hours ago.

Stewart - It would also be a downside however, the PLA will have access to all documentation of veterans or military-trained civilians allowing them to very.......
What if Australia loses the next war? - 18 hours ago.
Tweets by DefenceConnect