Bang for our buck? Afghanistan and ANZUS Australia has spent close to $10 billion on involvement in Afghanistan. With scheduled withdrawal being touted as a victory, a closer look at the numbers reveals it to be a Pyrrhic one at best, from a strategic standpoint.

Australia has spent close to $10 billion on involvement in Afghanistan. With scheduled withdrawal being touted as a victory, a closer look at the numbers reveals it to be a Pyrrhic one at best, from a strategic standpoint.

Just days after the infamous events of 11 September 2001, prime minister John Howard committed Australia to the US-led International Coalition Against Terrorism. Though a great deal of the subsequent press conferences and media releases held to the line that we were doing so in order to take on al-Qaeda and regional terrorism directly, they also made it clear that it played to the national interest to be seen to be supporting the US.

When Howard officially declared that Australia would be joining the US and our Western allies in the Middle East, he seemed to be speaking as much to American leaders as he was to the Australian people.

He cited Article IV of the ANZUS treaty, clarifying that his government “will be in close consultation with the United States administration in the period ahead to consider what actions Australia might take in support of the US response to these attacks”.

ANU security studies professor Clive Williams gave a particularly cutting exposition on the reasons for deployment in early 2019. Writing in The Sydney Morning Herald, he says that we became involved “to show we are a willing ANZUS and Western alliance partner in order to be well regarded by the US and receive the defence and intelligence benefits that go with active membership of the Five-Eyes relationship. Afghanistan per se is of little strategic importance to Australia”.

Whether one subscribes to the previous point fully or not, the proper yardstick against which a cost-benefit analysis of the Afghan war should be carried out is whether it has achieved this ostensibly primary goal of strengthening ties with the US.

Though Defence maintains that “Australia remains committed to a stable and secure Afghanistan”, that commitment has taken the shape of a proportionately large support contingent and relatively few people involved in operational deployment post-2002, when Special Forces were withdrawn.

Williams puts the total financial cost of ADF involvement (up to and including January 2019) in Afghanistan at around $10 billion, adjusted for inflation. Though alarming, this pales in comparison to that spent over the same course by our American allies, which totals US$975 billion in Overseas Contingency Operations funding.

On reconstruction aid alone (which falls into this category), the US has spent more in real dollars than it did on the Marshall Plan, which helped rebuild an entire continent from the ashes of World War II.

That figure, however, doesn’t include increases in the US Department of Defense base budget or that of the country’s Department of Veterans Affairs; both of which have ballooned to the tune of hundreds of billions (albeit, also because of involvement in Iraq and elsewhere).

Though it is surprisingly hard to pin down where Williams draws his figures from, the below table (which covers only Operation Slipper, Australia's contribution to ISAF) gives a good indication of how spending has steadily ramped up, with estimates expenditures first hitting the billion mark over the fiscal year 2009-10. 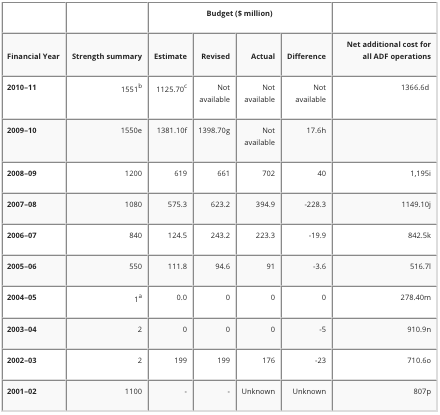 From various portfolio budget statements, summaries and funding documents, it is also possible to piece together estimates for the net cost of the broader Operation Highroad over most of the years 2007-16. These are:

Though impossible to know for certain, Williams’ figure seems to cut close to the mark. Put into perspective, the cost of funding ongoing maritime support in the MENA region – Operation Manitou – is estimated at close to $180 million, operational requirements being limited to only three Combined Task Forces (CTFs) and HMAS Toowoomba.

For this money, we are able not only to pursue Australian regional interests in terms of counter-terrorism, counter-piracy and maritime security, but also to be seen to act in support of the US-led Combined Maritimes Forces bloc.

Many other ADF operations, particularly those close to home in the south Pacific or the immediate South China Sea region, cost even less; yet manage to support what some might call “US adventurism” while simultaneously pursuing Australia’s immediate strategic interests.

Annual costs associated with Operations Solania and Augury-Phillippines, for example, are limited to the tens of millions, yet achieve maritime surveillance and diplomatic goals crucial to Australia’s geopolitical interests in our north-eastern neighbourhood. As tensions over the South China Sea continue to mount in years to come, these investments could become a tangible way of doubling down on the US-Australia alliance, with a much higher associated return on investment.

Even as operations in Afghanistan begin to wind down, ADF deployment to Afghanistan remains significant and detracts from our Pacific capabilities. About 300 Australian Defence Force members and Defence civilians are deployed in “Task Group Afghanistan” as part of Highroad.

The Task Group’s headquarters, located at Kabul’s Hamid Karzai International Airport, comprises a command element of some 40 defence personnel, including some of the ADF’s best and brightest.

The nation also commits support contingents to the Afghanistan National Army Officer Academy at Qargha, and provides advisory and protection support to both the Special Operations Component Command and the Afghanistan General Command of Police Special Units.

As the Trump administration looks to untangle the US from the 'forever war', Australia would do well to remind ourselves of both the costs of our involvement and the benefits it has achieved. At the time of Howard’s call to arms, Chinese GDP was under half of what it stands at today. Today, it is well-known even outside of strategic circles that China’s naval power looks set to unseat American primacy in the region, and that it may very well look to capitalise on this in the near future in order to assert historical claims over the 'nine-dash line'.

As the war in Afghanistan looks set to wind down, major analysts are calling for a serious re-think of the terms of the ANZUS treaty. Though the US-Australia alliance is a key component of our defence strategy, we learnt that non-binding treaties are all too porous in the early stages of the WWII Pacific theatre; when the British were unable to deliver on promises of substantial military support after the bombing of Darwin. This point rings particularly poignant in the era of Donald Trump’s America – in which the President has openly chastised close allies for relying too heavily on the US nuclear umbrella.

In a paper submitted by DFAT in 2001, titled Upside, Downside: ANZUS After 50 Years, the authors submit that in a non-compulsory military alliance:

"The weaker partner is by definition more vulnerable. It has fewer resources and must therefore fear threats which the larger partner could view as trivial. It runs the risk that, as the 'price' of protection, its great ally may seek to dictate important aspects of national policy, or that it may demand involvement in conflicts with little or no relevance to the smaller state's interests. Arguably, Australia's involvement in the Korean and Vietnam conflicts were of this type."

So long as our alliance remains of this type, investments made on the back of ANZUS may not end up being reciprocated. Given the amount of blood and money Australia has sunk into supporting American-led wars in the Middle East, perhaps it’s time to tie the knot.

Bang for our buck? Afghanistan and ANZUS